Paros is a sanctuary. It feels so good to be somewhere with less noise and hustle and bustle than Athens. My room at Jimmy’s apartments is in the port city, Parikia, and is more than I could have hoped for. Then again I would be ok with a tent as long as I’m still in Greece. The room is like a one room studio with a small kitchenette and a patio with a lemon tree. After getting my bags to my room I immediately found my swimsuit and walked the two blocks to the beach. The sea is a wondrous thing. Later Sarah, one of the professors, took us on a walking tour of Parikia. The HISA studio for paining and sculpture are in wide-open rooms on the winding old market street. A little further up, and a hard right at the pirate bar and there is the main HISA building. The one classroom has a long rectangle table in the middle. The idea of only having as many people in a class as can fit at a dining room table is incredible. After introducing themselves the whole school, all 27 of us, went to eat at Christo’s restaurant and then to the tavern next door for drinks, on the professors.

Sunday we took a tour of Paros Island. 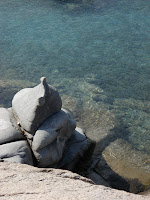 Out first stop was Kolibithres beach tucked in a cove between Parikia and Naussa, overlooked by the Ancient Mycenaean acropolis. The smooth granite rocks have slowly taken shape with the lapping of the waves from Aegean Sea, giving the beach a serene and secure feeling. The water is calm, clear, and a brilliant shimmering turquoise. 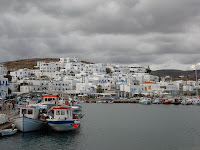 Our next stop was Naussa, another port town but smaller than Parikia. Fishermen quietly sit on their boats fixing their nets, while other natives and tourists relax and socialize in the numerous seaside cafes and fish taverns. On one pier lies a 17th century Venetian fort. Just off the pier is a restaurant called Barbossa with a pirate flag snapping in the wind, a steady reminder of the previous inhabitants that also developed the labyrinth of winding roads in the island, pirates. 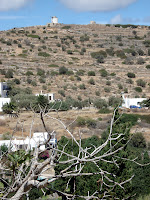 After Naussa we visited Lefkes. Even though it was once the capital of Paros, there are now more people buried in the sloping cemetery behind the Agias Triata church than there are living in the town.

Finally, we finished off our tour with a few hours in Piso Livadi sunning ourselves at the beach.